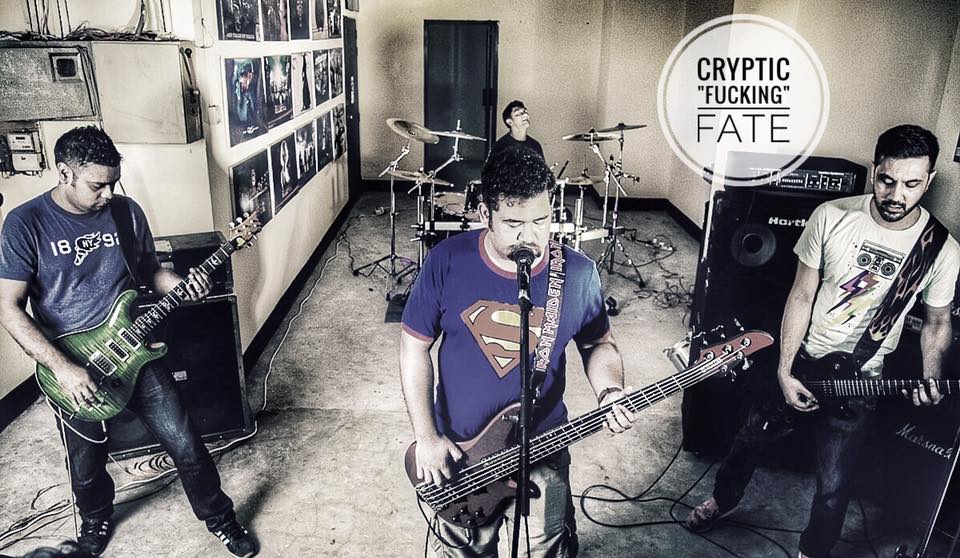 1993
The story begins in February 1993, when Wahed and Sarfaraz conceive the idea of forming a metal band. They quickly recruit school friends Shakib, Farshed and Iresh as bassist, drummer, and singer, respectively, and the original line-up is complete. Shakib names the band Cryptic Fate. As the story goes, Shakib was praying when the name came to him.
Original lineup:
Vocals – Iresh Zaker
Guitars – Waheduzzaman Khan
Guitars – Khwaja Sarfaraz Latifullah
Bass – Chowdhury Fazle Shakib
Drums – Farshed Mahmud
1994
Frustrated by the lack of concert opportunities, the band turns to composing. Shakib comes up with the riff for Fate’s first song “Captors of Fate”. Farshed writes the lyrics and names the song. A demo is recorded in Farshed’s living room, which receives lukewarm reviews from listeners. Farshed subsequently leaves for the States and the band again considers calling it quits. Farshed insists he will return in a year to record a full-length album, and the band agree to stay together.
1995
As promised, Farshed returns to Dhaka for summer vacation and the band begin writing their first album. Within a month, the band has eight songs ready. Fate enters Soundgarden Studios in July, and starts recording at breakneck speed. It takes only nine shifts to record and mix nine songs (thanks in large part to producer and musical genius, Imran Ahmed Choudhury Mobin). The result is Ends Are Forever.
Ends Are Forever lineup:
Drums – Farshed
Guitars – Wahed
Guitars – Sarfaraz
Vocals/Bass – Shakib
Ends Are Forever is released by Soundtek Productions and enjoys moderate success despite being an all-English metal album in a pop-saturated all-Bangla market.
Farshed returns to the US, soon to be joined by Wahed. Meanwhile, Shakib and Sarfaraz enroll at Independent University of Bangladesh (IUB), Dhaka, where they will later meet Farhan Hassan.
1996
Cryptic Fate begins writing their second album. In December, and after a long hiatus from the stage, Cryptic Fate performs at the ICMA Auditorium. The performance brings the house down. In the audience are future guitarist of Artcell, Ershad, and future drummer of The Watson Brothers, Arafat.
1997
First solo concert, PG Auditorium. Cryptic Fate opens with their title track “Ends Are Forever” and goes on to perform the entire album, in addition to a slew of covers. The audience goes wild and the concert is a rousing success.
Summer, second album. Once again, Fate returns to Soundgarden Studios. Mobin returns as sound engineer supreme. The album recorded is titled Sreshtho – Cryptic Fate’s first Bangla album.
Sreshtho lineup:
Drums – Farshed
Guitars – Wahed
Guitars – Sarfaraz
Vocals/Bass – Shakib
The rest of the year the band searches, unsuccessfully, for a production company to release the album. Fate are told metal is out of season. Meanwhile, copies of Sreshtho are leaked to fans, and quickly garner lavish praise from underground listeners.
1998
Lacking a second guitar player, Shakib and Sarfaraz invite Farhan to audition for the band. With a guest drummer on board, Cryptic Fate performs at Agargaon Community Center. Impressed by Farhan’s skills, Shakib asks Farhan to join the band (July 12) and Farhan duly obliges. The band is offered a concert at the end of July, but Sarfaraz suddenly leaves for the US for higher studies. Emon (from Jolly Rogers) auditions as lead guitarist but falls short of expectations. Farhan steps in as lead guitarist for the show. His performance is stellar and the band delivers yet another tight set.
The band performs two more shows during the year with help from Gibran (Dethrow) and Rinku as support guitarists.
1999-2000
Cryptic Fate continues to perform at concerts. Sarfaraz returns to Dhaka. Arafat (The Watson Brothers) joins the band as guest drummer. The highlight of the year is an open-air concert at RAOWA Club where Fate performs only two songs (due to time constraint). One of the songs is “Nisshongo”, a single from Sreshtho, and members of Black, Artcell, Dethrow and others, join the band on stage for a memorable performance.
2001
Cryptic Fate receives sponsorship from Pepsi. Sarfaraz temporarily leaves the band due to personal reasons. The band performs a concert at the Army Stadium where they introduce new drummer, Turjo.
Close to year-end, Fate is invited by Duray to contribute a song to the mixed album Charpatra. Shakib and Farhan collaborate for the first time, and the result is “Cholo Bangladesh” – a cricket anthem that goes on to become Fate’s first mainstream hit.
Charpatra lineup:
Bass/Vocals – Shakib
Guitars – Farhan
Drums – Turjo
2002
Buoyed by the success of Charpatra, Duray decides to produce another mixed album Anushilon, and invites Fate to contribute two songs. The band once again finds itself without a drummer (Turjo is busy with studies). Left with no choice, Farhan and Shakib play drums on “Shokal Choita” and “Eito Cholchey”, respectively. On a more positive note, Sarfaraz returns to the band, composing “Eito Cholchey”.
A full four years after it was recorded, Sreshtho finally sees light of day, thanks to the band’s new label G-Series. The album is an instant hit.
2003
Farshed returns to Bangladesh. First show of the re-united Cryptic Fate is at the Russian Culture Center in March. More shows follow, notably the “ABC” concert at Army Stadium, where Fate unites with Black and Artcell to perform Dream Theater’s “Scenes from a Memory”, and Metallica’s “Master of Puppets”. The band releases two more singles “Biday” and “Prem” for the Aguntuk mixed album series.
2004-2006
Cryptic Fate spend the better part of two years writing and recording the magnum opus Danob. The perfectionists they are, the band take their time delivering their much-anticipated follow-up to Sreshtho. The result is nothing short of brilliant. With Danob, Cryptic Fate continues the journey that began 13 years ago. Despite busy professional lives, the members of Fate remain committed to their music, their band, and their fans.
Danob lineup:
Drums – Farshed
Guitars – Farhan
Guitars – Sarfaraz
Vocals/Bass – Shakib
2007-2008 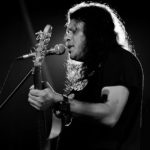