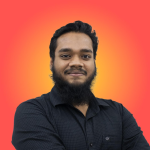 Faruq Mahfuz Anam known as James is a Bangladeshi singer, guitarist and composer. He is the lead guitarist and vocalist of the band Nagar Baul. He also played few songs in bollywood like Bheegi Bheegi, Chal chalein, Rishtey and Alvida (Reprise). He is considered to be the pioneer of psychedelic rock in Bangladesh.

James was born in October 2nd, 1964 at Naogaon and raised in Chittagong and Rajshahi. He played his first guitar when he was in class seven in 1973. James left his house when he was in class eight because his family doesn’t support him. Later then he joined “Feelings??? as a vocalist and lead guitarist. Now it is renamed as Nagar Baul. He is referred as “Guru??? of music.